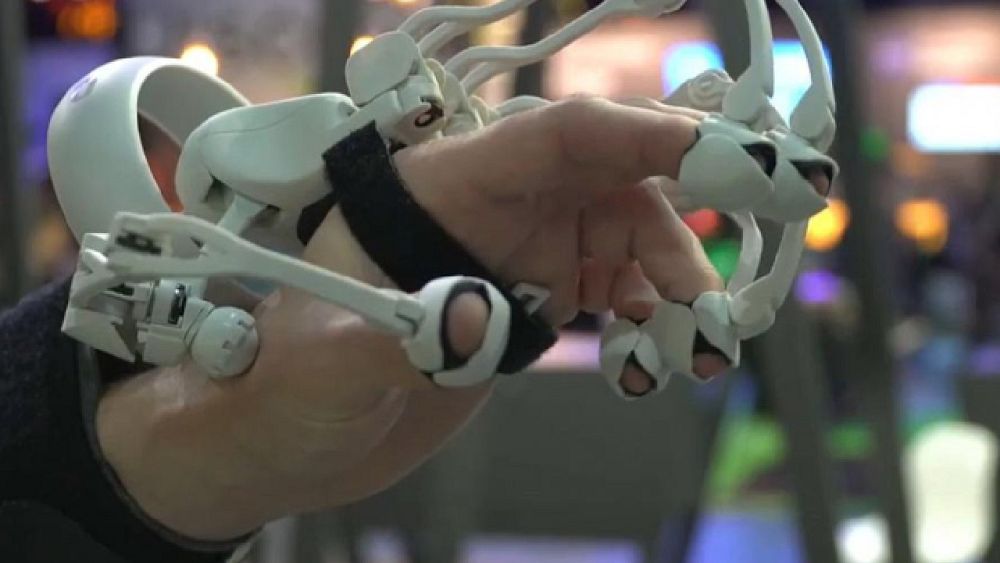 Deep tech: Three mind-blowing start-ups to watch as Europe aims to double down on its unicorns

Europe’s deep tech sector is in its heyday and accounts for a quarter of the bloc’s start-up ecosystem.

Deep technology is the umbrella term that covers all technologies based on tangible technical innovation or scientific advancements. It includes technologies such as artificial intelligence, robotics, quantum computing and blockchain.

Europe seeks to strengthen companies in the sector to be competitive on the world stage. At Mobile World Congress in Barcelona, ​​Euronews Next spoke to three deep tech start-ups to watch.

The Swiss start-up is developing technology that measures your facial expressions, such as eye movements and jaw bite in headphones, then sends those signals to a small box connected to the device, which sits on the back of your neck.

This internet technology of humans uses their closed-loop system which translates brainwaves and uploads this data to their cloud. Once processed, these signals can tell us a lot about our state of mind, including levels of fatigue, concentration, and other cognitive activities.

This health information is then analyzed and can help gain knowledge about different mental states, which could ultimately help people hear better or sleep better.

The start-up works with the Japanese pharmaceutical company Takeda and validates the technology for detecting sleep onset neuromarkers.

At the moment, the start-up is in the late seed stage and is a business-to-business venture but its goal is to roll out its products to consumers, so they can be used in multiple scenarios, including selecting your music playlist to suit your mood.

The technology is still developing and health regulations are still needed.

“People will look back 100 years from now and say people died of perfectly curable diseases because they just didn’t know it,” Simon Bachman, CEO and co-founder of IDUN Technologies, told Euronews. Next.

However, he said one of the biggest limitations of the medtech and health care field is that regulation means there is a huge barrier to entry into the industry.

Bachman said he welcomes the regulations and that the company has its own neuroethics committee that discusses data sharing issues. He also said the company is actively participating in the dialogue about how neurotechnology can and should be regulated and is reaching out to policy makers.

As for being a European start-up, Bachman said there “is literally no downside.”

“Europe is the place to be because we live in a connected world. And you know, the talents in Switzerland, above all, but also in Europe”.

Quantum computing is another sector that is taking off in Europe. It works by using quantum physics to create new ways to calculate.

Quantum computers generally have an advantage over ordinary computers in situations where there are many possible combinations, because they can consider them simultaneously.

Quantum computing can be used in several sectors, including businesses for risk analysis, governments for cybersecurity, and the pharmaceutical industry.

One UK-based start-up that is making progress with this technology is Oxford Quantum Circuits.

“We are a pure-play quantum computer services company, which basically means we build quantum computers and then put them into the hands of customers so they can solve some of the world’s toughest problems using quantum to create this quantum-enabled future. said Ilana Wisby, co-founder and CEO at Euronews Next.

The company launched this week with Amazon Web Services’ Amazon Braket so that for the first time quantum computing is now available by public cloud through Amazon Braket in Europe.

“So these are things that we can now provide,” she said, adding that they have now been able to have private clients work directly with them, which opens up a much bigger market for them.

The Greek start-up MAGOS is developing a hardware and software solution to revolutionize user interaction in the digital environment. He produced an exoskeleton glove that allows you to touch and feel in the virtual world.

The wearable glove-like product is connected to a PC and digitizes your hand movements with very high precision of finger movement.

The company uses unique sensors that are connected to every joint and capture every movement and sensation. This technology could be used by clinicians-in-training to perform procedures remotely and give data to healthcare providers remotely, potentially revolutionizing hand rehabilitation.

“We see that the computing devices of the future will be the headsets that the TED model displays for augmented reality and/or whatever product today’s hardware evolves into,” Magos CEO and Founder Greg Agripolous told Euronews Next.

Although the technology is revolutionary, it is difficult to compete as a European start-up, he said.

“We have American competitors. The market there is much more mature and corporate and there is more investment in technology.

“And the funds are available in the United States much more than in Europe, so we are having a very difficult time.”

However, Agripolous noted that despite these difficulties, the start-up has managed to attract innovation funds from the EU and attracts customers from the United States.

Can Europe be competitive?

Europe is trying to bolster its tech ecosystem to rival those of the US and China with a new initiative.

The European Startups Alliance (ESNA) was first announced during the Portuguese Presidency of the Council of Europe in November last year.

ESNA is in charge of a new standard for start-ups across the block and will compile best practices, provide technical support and monitor the progress of start-ups.

It also has an ambitious goal of doubling the number of unicorns on the block by 2030.

Member States have made commitments to ESNA, including France, which has pledged to facilitate the creation of 10 to 20 late-stage investment funds with at least €1 billion under management and an increase in funding for advanced technologies.

At Mobile World Congress, digital and economy ministers from Spain, Portugal and Austria met to discuss how ESNA could shake up start-ups in the bloc.

Too much fragmentation is another problem the alliance wants to solve.

“There are 27 different member states and legal frameworks (…), which is different from the US single market,” said André de Aragão Azevedo, Portugal’s secretary of state for digital transition.

Pere Duran, the director of startup platform 4YFN (four years out), said data protection was another issue for the bloc.

“I believe there are several challenges, and one of them is being able to compete with ecosystems like China and the United States, which probably don’t have as many regulations as we have here on tax areas and data protection,” he said. told Euronews Next.

But Duran said the start-up scene in Europe was “really thriving” and investment in start-ups in the bloc was at record highs.

“More than 100 billion was invested in European technology last year, so it’s a very good time to be a digital entrepreneur in Europe,” he told Euronews Next.

How to Make Money with DoorDash: Getting Started