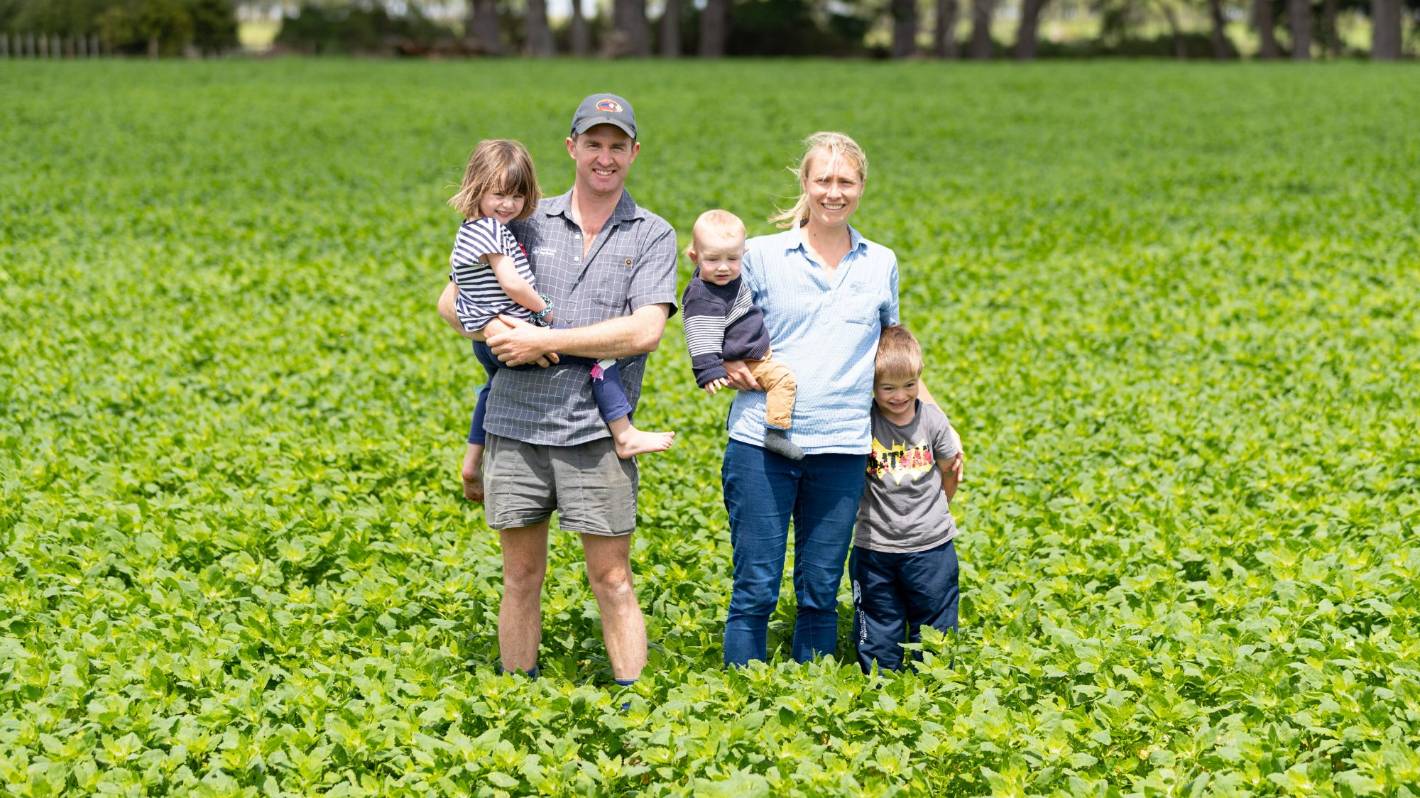 Taranaki sheep and cattle farmers Hamish and Kate Dunlop with Annabel, 4, Tommy, 1, and George, 5, among their quinoa crop. Quinoa has been identified as a commercially viable food opportunity for the region.

It’s not often you see avocado, hemp, kiwi, quinoa and sheep’s milk mixed together – but they’ve been identified as part of Taranaki’s future saving recipe.

Venture Taranaki began releasing its branching plans this week – a list of 10 innovative and commercially viable food and fiber opportunities.

Opportunities have been explored and validated over 18 months and are now published for use by the community and a range of interested groups and individuals to advance new ventures.

READ MORE:
* Thousands of avocados planted in Taranaki
* Oaonui avocados on your toast?
* The horticultural potential of 207,000 hectares of Taranaki

It is hoped that the diverse bouquet of opportunities will support the region’s long-term vision for a resilient, high-value, low-emissions future.

“Progress will only be possible with buy-in from the community and investors, and real commitment from existing players,” said Anne Probert, Managing Director of Strategy and Regional Sectors at Venture Taranaki.

“We have identified a list of companies that embrace innovation, growth and offer market potential, creating value and resilience for our regional economy.”

Shining Peak’s head brewer, Jesse Sigurdsson, welcomed the idea of ​​local hops, which he currently sources from Nelson and overseas.

“It’s always nice to use local, because it supports the community and comes back into the economy, it also takes a lot of freight miles and carbon footprint, credits like that out of the equation.

“The hop side of brewing, I would compare it a lot to wine and grapes and the difference you get from grapes grown from region to region. So we could get this amazing growth here that you can’t get anywhere elsewhere, because of the climate and our soil.

A number of farmers and producers in the region are already taking advantage of the opportunities that Venture Taranaki has highlighted.

In a press release, Venture Taranaki said more than 70 ha were already under development or under serious consideration for avocado development.

These include entrepreneur Matthew Hareb, who is establishing a 30-hectare avocado orchard near Brixton.

Gin plants are also on the list of industries likely to operate on a large scale in Taranaki.

David said the local business community, as well as Taranaki’s fertile soils and climate, all lend themselves to entry into high-value, low-footprint or low-footprint crops.

One of the hardest parts for businesses getting established — and especially those that involve growing a product — is managing cash flow, David said.

“I think that would be the biggest hurdle. The skills, the knowledge of how to farm and the quality of the land, all of those things are here.

There are other examples of successful ventures as shown in the plans.

A 26-hectare kiwifruit orchard has been developed in Waitōtara, and hemp has been used to create a new pataka kai in the Marfell Community Garden.

Indigenous superfoods are transformed into healthy foods and drinks by Kaitahi As One of South Taranaki, whose products are stocked in supermarkets nationwide.

Venture Taranaki has identified 270,000 ha of land suitable for horticulture, including 3,667 ha of land where owners have identified opportunities for diversification.

“We are now seeing a unique and diverse food tapestry developing, built on cultural, social and environmental forces.”